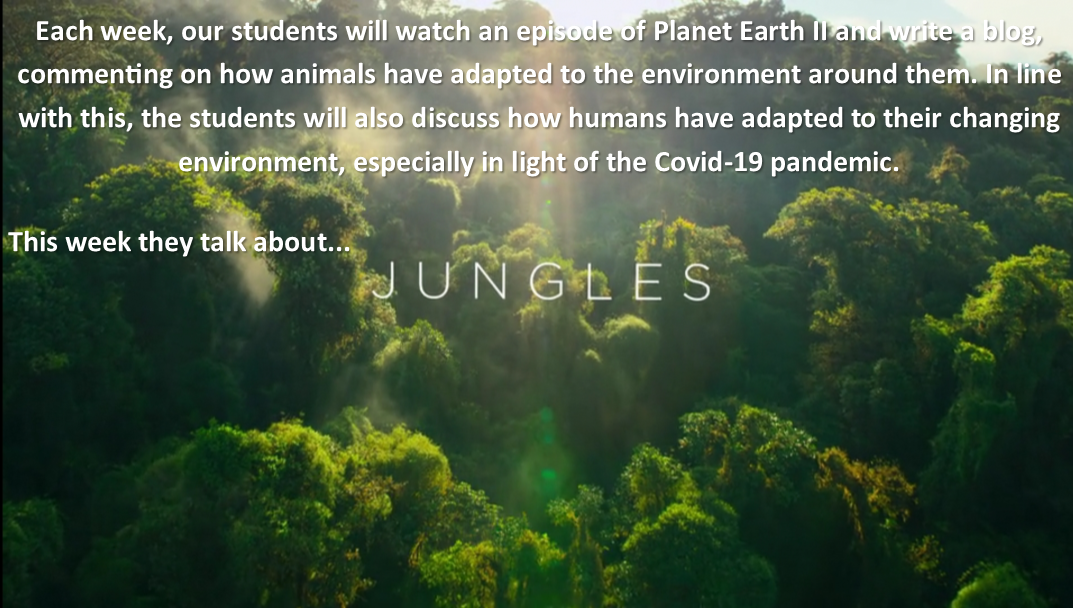 Covering less than 6% of the Earths surface, the Jungle is home to more than half of the plants and animals on land. Filled with lush tropical plants, each species competes not just for food, but also for space making the jungles some of the most competitive places on the planet.

Spider monkeys have adapted to life in the jungle through the adaptation of large limbs with long, gripping tails for holding onto branches. This allows the Spider monkeys to be able to climb and navigate its way through even the tallest of trees. However, only 30% of Spider monkeys reach adulthood as many young can easily fall from great heights and not survive. The young are more encouraged to develop this technique by themselves under minimal supervision of the parents. Only in great peril will the parents step in to save their young. Humans themselves have adapted in similar manner for teaching their young how to survive in the world, although we take more care to ensure accidents don’t happen. In Human society we have schools where students learn the vital skills such as communication. Although we do not have a tail to help with climbing, humans have adapted by inventing climbing equipment (e.g. ladder) to access areas that would normally be out of our reach.

Draco Lizards could live their entire live on one tree as it would provide the lizard with enough food for a lifetime. However, only one tree would be sustainable for one lizard. Therefore, if two Draco lizards come into contact on the same tree they have two options: they must fight or flee. Many individuals choose to flee if competing against larger rivals. The lizards can extend their ribs and connecting membrane to create wing-like features which helps the lizards glide to safety if fleeing. For Humans, instead of fighting over resources, people have adapted by trading. Trading allowed the exchange of resources without there being any physical confrontation. In today’s age, food is traded in exchange for money, which helps with the growth of more food. As resources are not distributed equally, many people will transport food from one area to another using aeroplanes and trucks.

The blood of the jungle is water, as it flows through the rainforests in rivers and consistent periods of rainfall is key for the survival of many plants and animals alike. The jungle creates its own weather by allowing for rapid evaporation of water from leaves which results in low clouds over the canopy. The clouds then release the water in torrential downpours. Every species has to deal with this, many do so by hiding under leaves for shelter. Humans have adapted from extreme rainfall by building houses in high up areas and having roofs which prevent water seeping through to ensure people are warm and dry. The heavy rainfall can cause flooding with some areas being submerged in 30 feet of rainfall. This has allowed for the adaptation of aquatic species to thrive.

Along the riverside, many species live and thrive as they have access to both water and food. Crocodile–like creatures known as Caiman live in the rivers and attack any species it can find by sneaking up on the prey with its streamline body and capture prey with its powerful bite. Prey includes fish mostly as well as some mammals such as Capybara, the largest rodent species in the world. The Capybara have adapted to swim in the river to be able to eat fish themselves, move between riverbanks as well as being able to cool off in the warm sunny weather. Humans have always seen rivers as important resources as they also utilise the river for fresh supplies of water. Humans have been able to catch fish through creating nets and inventing fishing poles. Water was also extracted for bathing, drinking and getting rid of waste. Civilisations have travelled in search of water and have built their homes near it. Even today, many of the great cities such as London, New York, Budapest and Paris have rivers flowing through them. Rivers have proven essential for the development of Human life.

The Jungle forces many species to have specialised traits and characteristics, this includes courtships. Male Red Birds-of-paradise preform a dance to impress the females. The dance includes moving up and down on branches of the trees. The female then chooses a partner based on the dance they preferred the best. Wilson Birds-of-paradise stay near the ground, and require a bit more effort to capture the attention of the female. The male must first find a patch of light so they can be easily seen, have a branch that hangs down so he can stand on as well as removing any brightly coloured leaves, especially green ones. This is all so the female is not distracted and will focus solely on him. Humans today are quite similar with people focused on the way they look to attract a partner. Make-up and other cosmetics have been introduced to enhance features along with some even using plastic surgery for cosmetic effect. A large amount of people also do regular exercise to get bodies they feel are adequate and desired by partners and wear expensive clothes to impress potential partners. However, not everyone focuses on just looks like birds do, but also look for partners with a particular personality and attitude.

The jungle is a wondrous place filled with the most remarkable of species which aren’t found anywhere else. However, the jungle does face many threats including deforestation which has seen many of these great species disappear.  As we too had relied on the jungle for survival, is it not our right to help protect these places for many, many years to come?