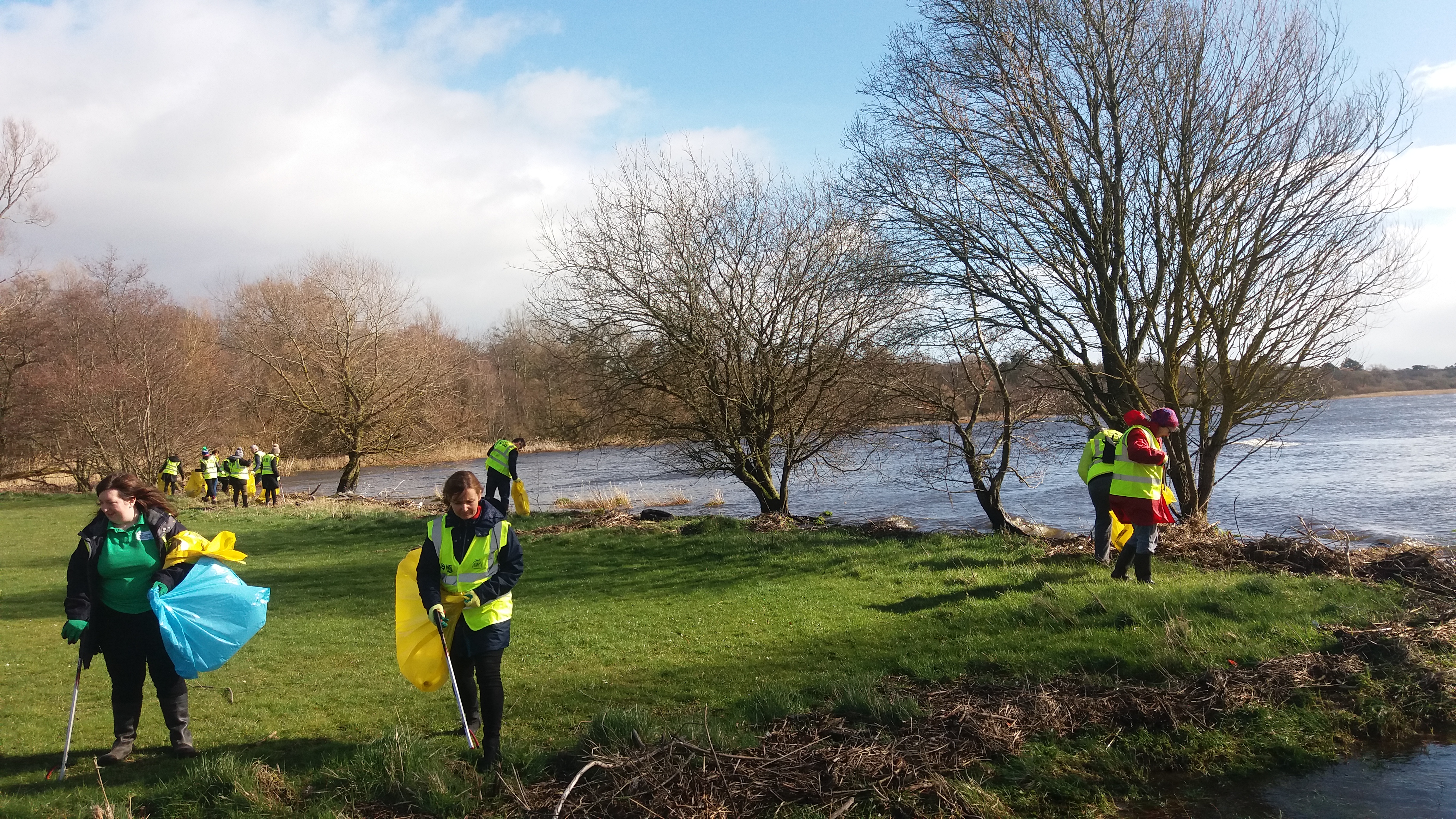 Lough Neagh Partnership and the Rivers Trust are delighted to support the local community groups around the shores of Lough Neagh who want to change attitudes to litter.  Around Lough Neagh we can see the damage done to valuable wildlife habitats through our careless attitude to litter.  Plastic bottles, straws and single use coffee cups are blown from roads and lanes into streams and into Lough Neagh where we are contributing to killing of sea birds and sea animals.   Lough Neagh Partnership and the Rivers Trust are throwing our efforts behind the Live Here Love Here Campaign to do our bit.

Because we  Live Here beside the Lough

We Love Here and do not want our place looking like a skip!

Next events coming up: – 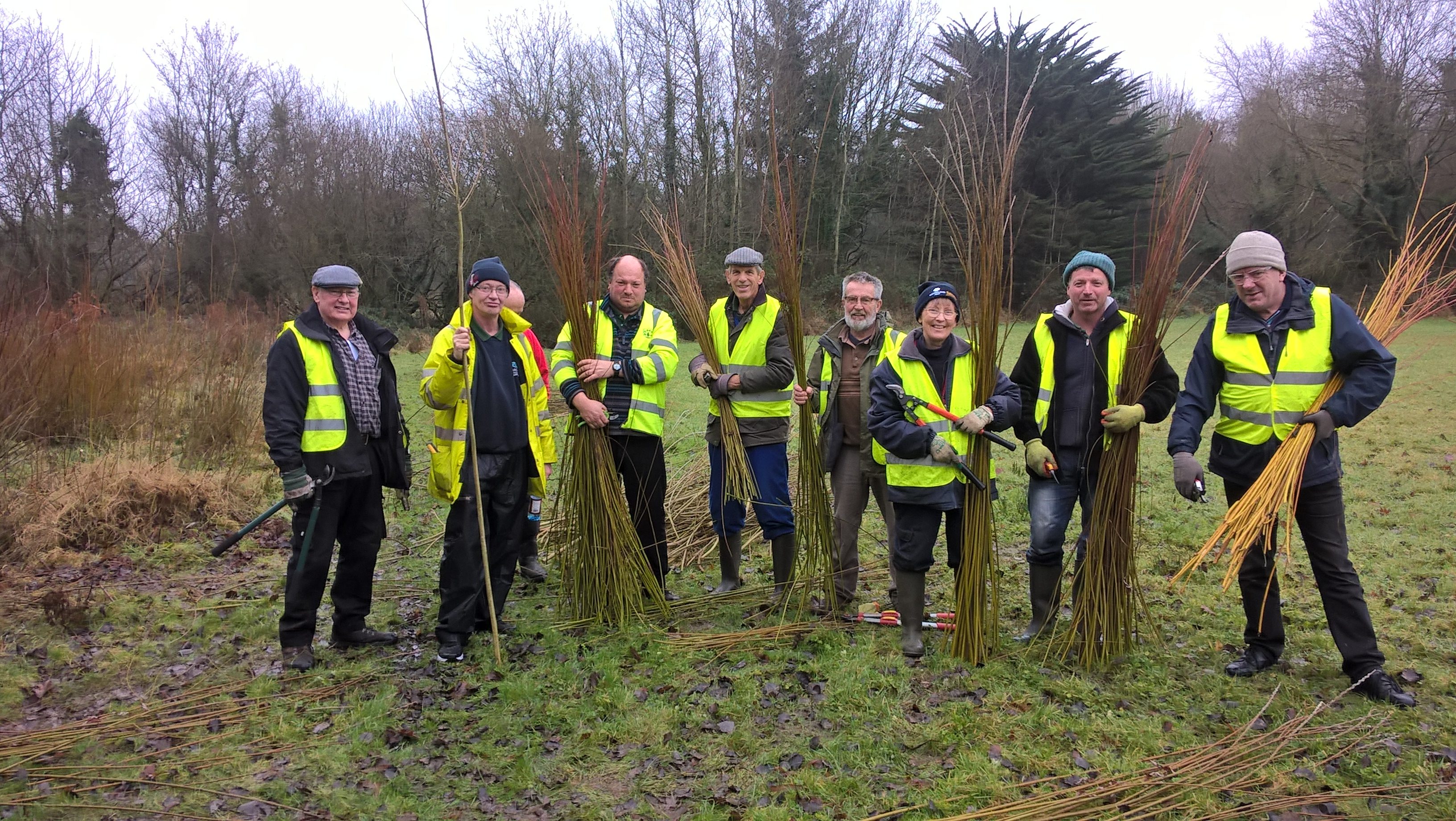 Volunteers enjoyed a bright crisp morning at Oxford Island last Saturday.  “Such a beautiful morning to be out” said Gerard Mellon from Aghagallon.  I have been at the Willow Workout now for over 5years.  Every year I meet new people and make new friends”

“Every year we cut the willow trees back to the stump to give us a harvest of willow rods that I can use for classes in basket-making” explained Paul Carville from Aghacommon. 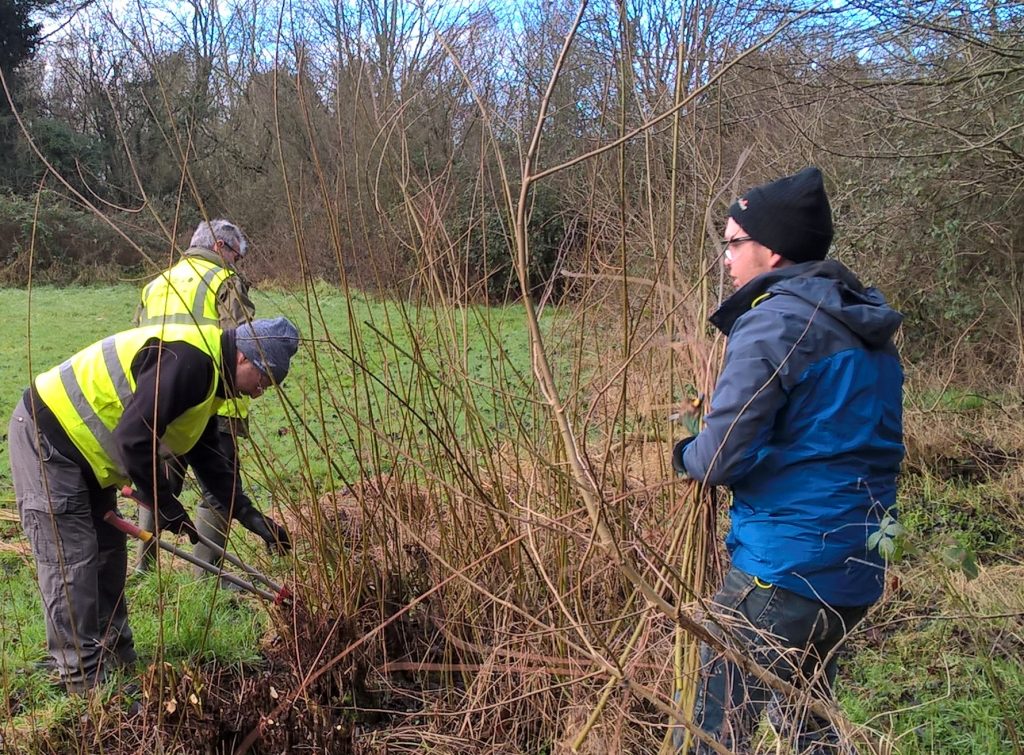 “The ancient practice of coppicing strengthens and prolongs the life of short lived trees such as willow and hazel” explained Chris McCarney, Volunteer Officer with the Lough Neagh Landscape Scheme.  Hazel and willow are an important part of the landscape around Lough Neagh and provide a home for many native birds and animals. 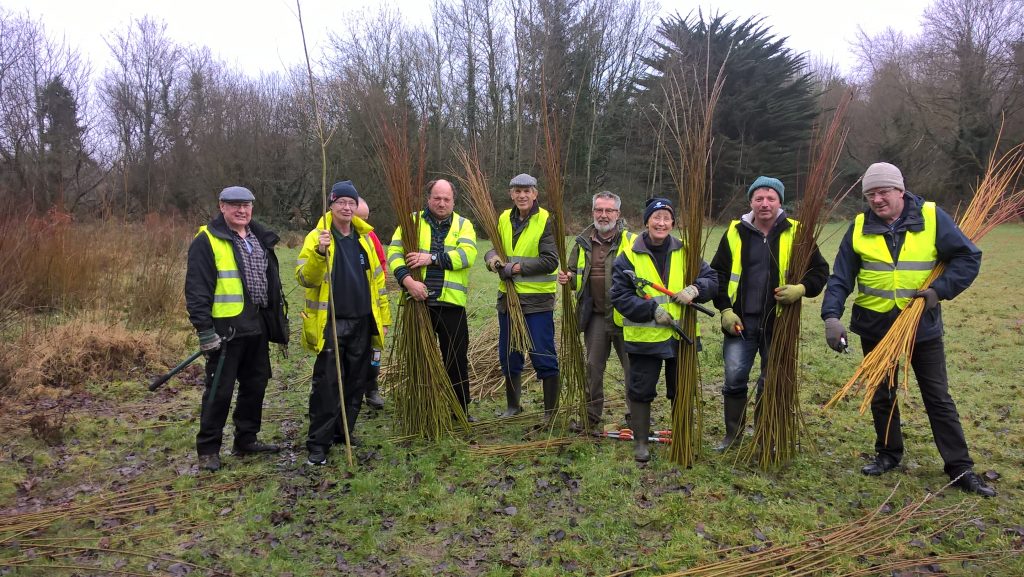 Come along and join us at Lough Neagh Discovery Centre, Oxford Island every Saturday at 10:30am  during January and February. 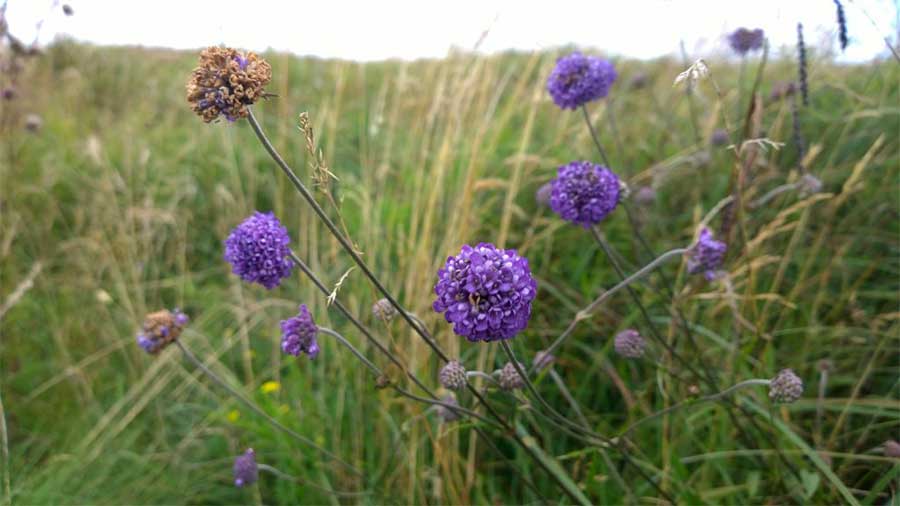 Lough Neagh sits in the center of Northern Ireland with many small communities nestled around its shorelines. It has inspired poetry, supports local and international wildlife, provides a large water catchment area that helps supply drinking water for people across Northern Ireland, and is home to the largest commercial eel industry in Europe. The Lough has many faces – from wild and windswept to calmly serene – each as quietly beautiful as the other.

Visitors and locals come to the lough shore from across the province. For many it is an opportunity to be close to nature and there is no doubt that the Lough holds a special place in the hearts of many.

Lough Neagh Partnership (LNP) are working with local landowners, farmers, industry, and communities through its landscape partnership scheme (funded by heritage lottery fund) to deliver a number of important cultural, built and natural heritage projects around the lough.

One of the main Natural Heritage projects is “Saving Nature” where LNP are working alongside partners RSPB NI, Local Landowners, Farmers, NIEA etc. to look at the key habitats around the Lough and the important wildlife species they support. Through a system of monitoring, research, engagement and practical restoration we hope to help improve the biodiversity at key sites and locations around the Lough. Through this research we can improve our understanding of the impact we as people are having on the Lough, and gain knowledge which will allow us to continue to interact with this landscape in a sustainable and well informed manner.

Lough Neagh Partnership (LNP) have been working with local landowners and the wider community looking at the potential impact of pressures such as climate change, over and under grazing, scrub control, etc. on the ecologically sensitive habitats and biodiversity found within and around the Lough Neagh & Lough Beg Special Protected Area.  Work is currently being carried out at Brookend Nature Reserve, where vegetation surveys are being carried out assessing the change in habitats and any changes in biodiversity. Surveys are also been undertaken to look at the invertebrate population found on the site and how this has altered with changing management on the site. Once the surveys have been carried out LNP will aim to work alongside Northern Ireland Environment Agency and other local landowners within the area to help improve the biodiversity value of the lands and offer support to the local communities and peoples who are looking after this valuable wildlife resource. It is also hoped that with correct management breeding waders such as curlew, redshank, and lapwing will start to use the lands again.

There are many pressures both man made and environmental that are acting on these special habitats, and whilst funding has been secured for the immediate future as an organisation we are constantly seeking ways to draw in more to continue this important work. Working alongside local communities and farmers is a vitally important part of our work, and educating recreational users and others on the potential impacts of their use and how they can help us to look after the Lough and its surrounding landscape is for us a big part of what we do. We are not alone in our love for this landscape and we would ask people to engage with us and help manage this landscape.

For further information and details of volunteering opportunities within Natural heritage projects, please contact either the Natural Heritage officer Siobhan Thompson at siobhan.thompson@loughneaghlp.com or Chris McCarney the Volunteer officer at chris.mccarney@loughneaghlp.com 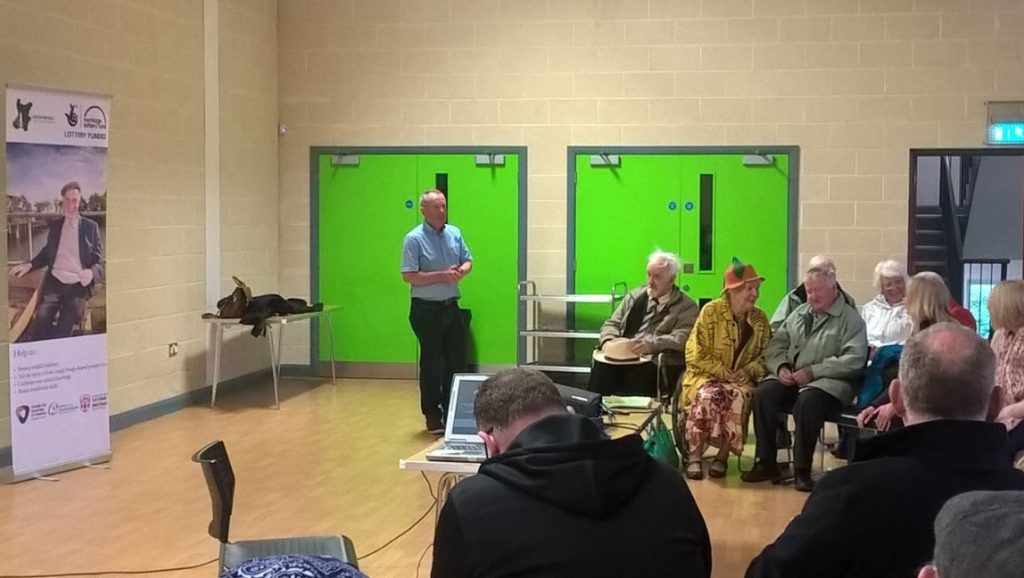 The fieldwork for the archaeology dig at Aghagallon was completed last year.  Lough Neagh Partnership Ltd commissioned the Centre for Archaeology at Queens to explore the ancient enclosure at Derrynaseer as part of the HLF Landscape Scheme funded by the Heritage Lottery Fund.

The enclosure at Derrynaseer, Aghagallon has long intrigued archaeologists. The enclosure is large, about 160m in diameter, and more or less circular, defined by an earthen bank which has become incorporated into the pattern of local fields.  At the initial community information night in Aghagallon, Dr Colm Murray, Director of the Centre for Archaeology Fieldwork explained that the size and location of the site meant it was important for the whole region but that the team were starting the excavation with three possible hypothesis including: –

“The local townland names also give us important clues” explained Dr Liam Campbell, Built Heritage Officer with the Lough Neagh Partnership, “The enclosure is in the townland of Derrynaseer, from the Irish means – oakwood of the craftsmen while Aghagallon is based on the Irish for – field of the standing stones.

Dr Colm Donnelly emphasised “The work of uncovering the past is like peeling an onion and rarely will we get a simple definitive answer but rather we will get bits of evidence that will raise a whole range of additional questions.”

The archaeology team moved into the church carpark on Monday 5 June and set up camp.  Over the four week period of the dig,   49 volunteers and 120 school children joined the Queen’s team to get down into the trenches and help uncover the secret past of this ancient site.  In total seven trenches were excavated at different locations across the site to uncover and explore “anomalies” found during and initial geophysical survey of the site.

Dr Liam Campbell said “In the excavated trenches, we found preserved seeds, fragments of wood and slag from metalworking, probably copper working.  In another trench, the presence of pits or post-holes along with charred hazel nut shells, and burnt bone.  A fragment of waste from glass working from the medieval period was found just above these features”.

In the trench near the hedge, the archaeologists were delighted to find an internal ditch filled with a charcoal rich soil, which contains some charred barley grains within it, some struck flint, and one possible fragment of Neolithic pottery.  Archaeologists have observed that a common feature of all henge monuments is the absence of an external ditch. They all have a bank, but unlike more or less every other type of field monument with a ditch and bank in Ireland or Britain, there is never an external ditch. Instead there is typically an internal ditch, sometimes deep, sometimes wide and shallow. The suggestion has been made by some archaeologists that this indicates that the intention of a henge is to keep forces of a spiritual nature contained within the henge, rather than keep forces of a material nature on the outside, such as, for instance, would be the case with a fort. 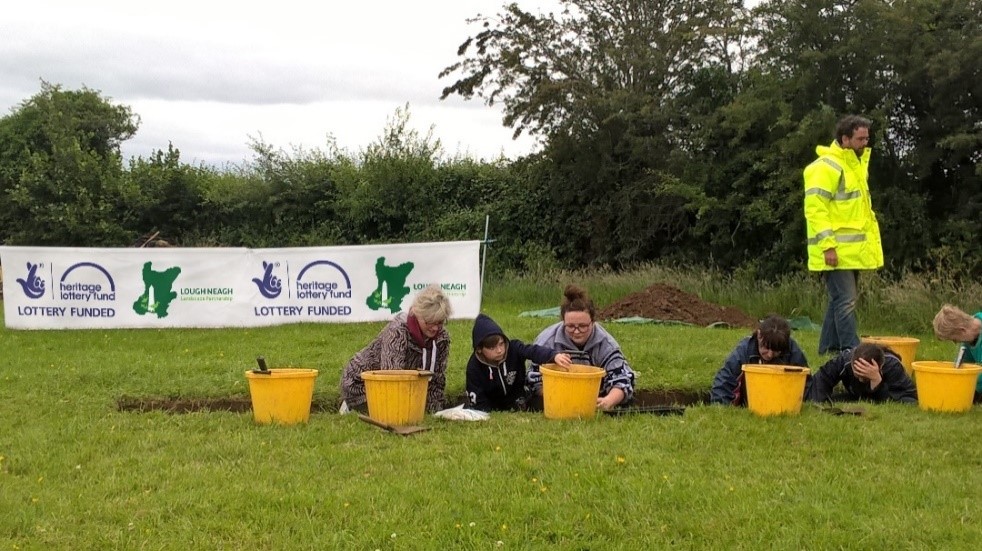 At the final tour of the site, Cormac McSparron, Site Director explained that his team will have a lot of work to do to follow up on the fieldwork.   “We will send the samples we have gathered for radiocarbon dating.  This will give a specific time window when Neolithic ritual activities took place on the site and a similar time window for the craft working at the site.  We can say for certain that the site was used as a ritual site around 3,000BC the Neolithic period and the site was used around 1200AD as a medieval fair for crafts people: metal working, probably copper working, and some indications of glass working also.”  It is initially difficult to comprehend that the two activities took place thousands of years apart and the local people would have had very different perceptions of the site during these different periods in history.”

“This is an important and fascinating result” said Dr Liam Campbell and confirms the importance of linking oral and cultural history found in local stories, field names and townland names to archaeological investigation.  “We can now say with a level of confidence that the place name ‘Derrynaseer’ referred to the craft activities of copper and glass work on the site in the medieval period while the place name ‘Aghagallon’ referred to the standing stones refers to more ancient times.”  Dr Liam Campbell enthused “This finding gives us some proof of just how old at least some of our townland names are!”

In particular, the Centre for Archaeology Fieldwork were so generous with their time and expertise “We would like to thank the local community of Aghagallon for being such welcome hosts and all the volunteers for their help”. said Dr Liam Campbell, “We would particularly like to express our sincere thanks to the staff of St Patrick’s Parish, Aghagallon for allowing us to dig up their land and accommodate us for the duration of the dig.